From the head to the neck, the waist, wrist and ankle, wearing the African beads can always make one stand out if done the right way. Here is how to rock your bead and make heads turn. 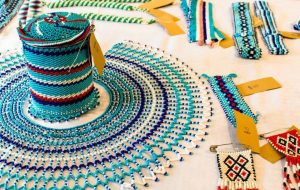 Precious stones are always the first choices for women for their elegance, beauty, and sophistication. But if you want to try some unique and elegant pieces, the traditional African jewelry is something to try out.

When it comes to beautiful jewelry, most often, the continent of Africa is best known for its handmade beautiful beadwork. The beads that are made in Africa are often called ‘trade beads’ because in many centuries they were used in exchange for goods or used as currency. Dating as far back as 1500 B.C, the most beautiful pieces usually are handmade in Libya and ancient.

There are many types of jewelry handcrafted in Africa. Keep reading to know about some of these traditional African jewelries, which you can use to accessorize every day.

Waist beads can be considered as a symbol of femininity, celebration, or aristocracy. Most times it is hidden beneath the woman’s clothes as a way of self-care or confidence or intimate appeal and only opened to her lover as a symbol of sanctity and purity between the two. For some, the beads are a means of seduction to provoke desire. In some cultures, wives would use the rattling of the beads to communicate their fertility.

Some other reasons for the waist beads are to signify rites of passage & symbols of growth, measurements and body shaping. 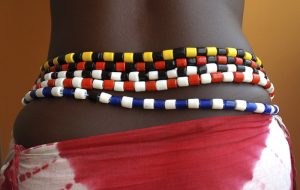 Ostrich Eggshell beads of Southern Africa (the pearls of Kalahari):

The Ostrich Eggshell beads were first discovered at the Loiyangalani River and Valley in Serengeti National park in Tanzania. In Ethiopia, women with children wear double strands of anklet made from ostrich eggshell while grandmothers wear a single strand. They are still being made till date by women of the San Bushmen tribe of the Kalahari Desert of Southern Africa. 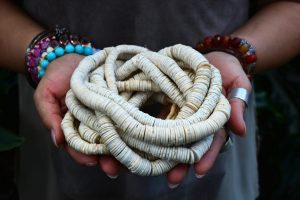 In ancient Ethiopia, the Evil Eye Beads were worn by the upper class in society to ward off any possible attack from members of the lower class who were said to possess the evil eye of Buda. In modern times, those beliefs are far gone and the evil eye beads are now seen more as fashion pieces than anything else. 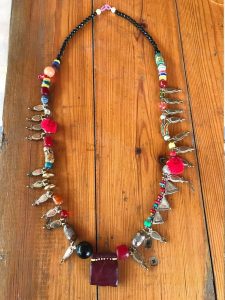 These colourful and adorable beads are one of the most unique aspects of the Maasai tribe in Kenya. It is considered a necessity for every Maasai woman to learn to make Maasai jewelry for both genders. These beads signify the social status and age of individuals and families. The marital status of women is clearly spelt out by the kind of bead she wears. Some Maasai beads are still made from materials like bone, copper, brass and wood before Europeans introduced the synthetic materials. 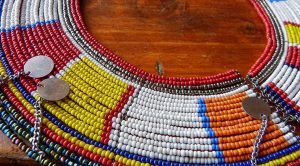 Made of clay, the clay beads were one of the first known beads to have existed in Malib before the Marriage beads emerged. These multicoloured bulb shaped beads were more expensive than the clay ones and were used for special occasions like marriage ceremonies. The marriage beads are still being used among the Fulani and some in the Benin Kingdom during festivals. 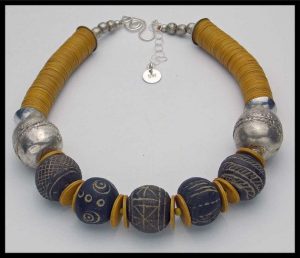 These are made with ground glass and a binder (saliva). Named after Kiffa, a town in Mauritania, these age-old beads are characterized by unique designs and a triangular shaped pendant which is usually bigger than the regular beads. 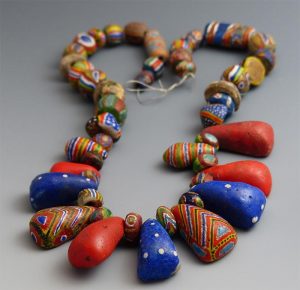 These beads are characterized by a smooth feel and glossy look. The materials are derived from rocky sea bottom with low sedimentation on the coral reef.

No traditional wedding from the East and Southern part of Nigeria is complete without a show of these red beads. Brides-to-be long to rock these beauties on the day they are given away. These beds are usually made into headpieces, (Okuku); hand beads, (ivie-egbo); necklaces,( ivie-uru), and earrings, (emi-ehorivie). 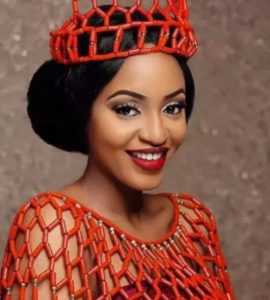 Named after the tribe of the most popular bead hub in Ghana – Krobo Odumase and are found among the royalty in Ghana who wear different colours and designs to depict wealth and the clan they belong to. 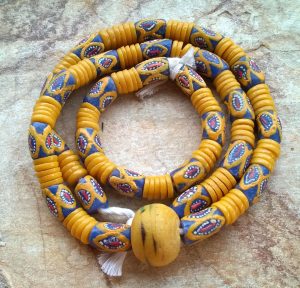 In Africa, beads will continue to have its place in culture and fashion because some see them more than just decorative pieces. African beads are gaining global recognition and adorning yourself with one or more helps to display the diverse culture and ethnicity to the world.