For the average person, The Sapphire brings up an image of a shimmering blue gemstone. While this idea of a sapphire has much truth to it, there is much more to the precious gemstone than one’s typical preconceived notions.

Sapphire usually means the gem is blue but sapphires also appear in colorless and black variations as well as a wide range of colors. They include violet, green, yellow, orange, pink, and purple. They’re considered fancy-color sapphires and designated by color, as in “yellow sapphire.” 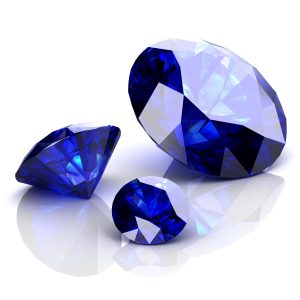 Sapphires, like rubies are corundum. Except for the impurity elements that causes color, they are the same chemically, physically, and optically.

Clergy in the late middle ages favored blue sapphire for their ecclesiastical rings because its color symbolized heaven.

Magicians said it led them to prophecies and allowed them to command spirits.

People also turned to sapphire as medicine for eye ailments like cataracts.

France’s fourteenth-century King Charles V owned “an oval oriental sapphire for touching the eyes, set in a band of gold.”

People took sapphires as an antidote for poison and poisonous bites. They believed the stone could clear the mind and skin and cure fevers, colds, and ulcers. They even enlisted it in their fight against the plague—at least those who could afford one did.

The superstition and faulty science began to recede in the late eighteenth century. That’s when crystallographers determined that sapphire and ruby were the same species and moved toward categorizing them under the name corundum. 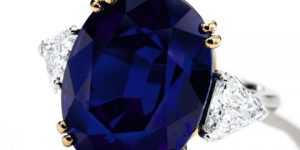 The most famous historical sources are the Kashmir region made up of Pakistan, India, Myanmar and Sri Lanka. Kashmir, high in the Himalayas, is renowned for the finest of all sapphires. They are an intense, medium-dark blue, with a unique velvety appearance.

The color is called “cornflower” because it resembles the almost fluorescent blue petals of that flower. Burmese sapphires are also beautiful. Their blue is intense, but darker than the blue of those from Sri Lanka.

Another long-time source of sapphires is Sri Lanka, formerly Ceylon. Connoisseurs put a premium on padparadschas, the pink-orange to pinkish orange sapphires from Sri Lanka. The blue sapphires from that country are called Ceylon. They are often lighter and brighter than stones from Myanmar. 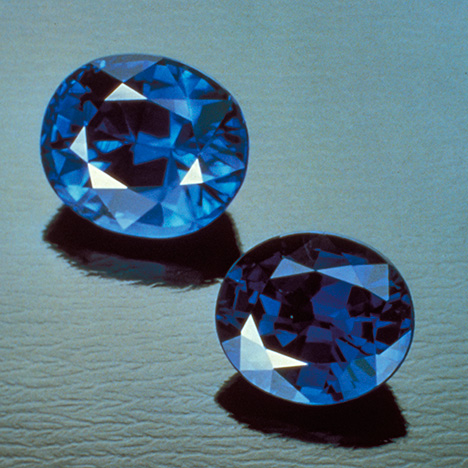 Many synthetic sapphires are the result of the first and least expensive of synthetic processes: flame fusion. Some of the earliest examples are in original pieces of art nouveau and art deco jewelry. It’s relatively easy for a trained gemologist to distinguish flame-fusion synthetic sapphires from natural material.

Also hard to determine are synthetic sapphires from either the Czochralski-pulled or hydrothermal processes. Neither type usually has much visible inclusions for easy identification. 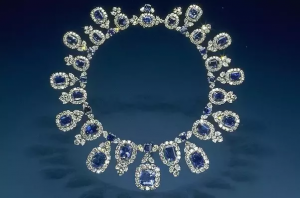 Heat treatment is not only common for sapphires, but also a required art.This is because sapphire changes color when it’s “cooked” for the right amount of time and under the right conditions. Improved color is the main objective of heat-treating sapphires, while a secondary goal is improved clarity.

Sapphires are also candidates for lattice diffusion treatment. Because the resulting color is sometimes only surface deep, it might disappear during polishing, be chipped away, or lost in other damage. 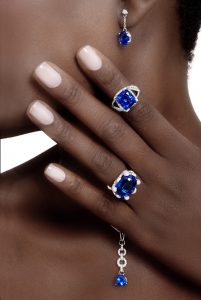 The most highly valued sapphires are velvety, violetish blue to blue, in medium to medium-dark tones. Preferred sapphires also have strong to vivid saturation. The saturation should be as strong as possible without darkening the tone too much. Sapphires with these qualities command the highest prices per carat. 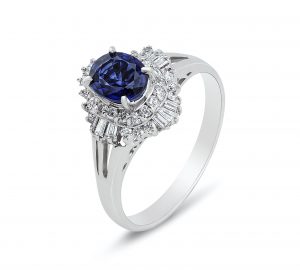 Prices also vary for fancy sapphires. For example, the pricing on padparadschas can be as exotic as the color itself. Only the most experienced buyers can successfully make their way through a market where sapphires showing the slightest pink or orange might be offered as padparadschas. Generally, the color in the finest padparadschas is an intense pinkish orange hue.

There are two phenomena typical to sapphire and both affect value. One is color change. Many color-change sapphires come from Sri Lanka and East Africa. Some in the trade compare them to fine alexandrites. Typically, with strong change, the actual colors are blue and purple. The other phenomenon is asterism. 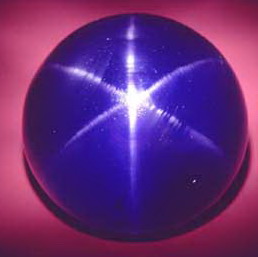 Star sapphires have traditionally been very popular, especially those with blue or black body colors. The sharper and straighter it’s rays and the purer it’s blue—the less gray it shows—the more valuable a blue star sapphire. Black star sapphires are more fragile than other star sapphires.

As long as the sapphires are not oiled or glass-filled, they can be cleaned with ultrasonic or steam cleaners. Warm, soapy water is safe for cleaning, although strong detergents or vigorous scrubbing can hurt an oiled stone.
Post by Tekena Koko