Although the local cuisines in Edo state can be found in other Southern states, there are some meals that are uniquely tied to their people.

These indigenous meals have variations in other cultures and places, they are popular within the state and have come to be known as Edo food, as they are believed to have originated from the area.

If you are visiting Edo state, it is important that you do not just explore the locales, but also gain the full Edo experience by tasting some of their widely recognized indigenous meals. 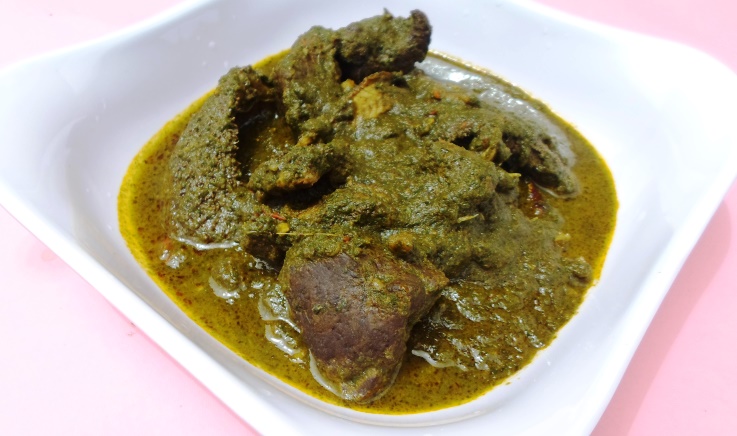 The black soup is the most popular Edo popularly referred to as Ian Esan (Ishan) food, and is locally referred to as Omoebe soup. This delicious meal is made from a blend of local herbs and spices. The name comes from the colour of the soup, as the vegetables used – Bitter leaf and Effirin (Scent Leaf) – when grounded gives off a very dark colour.

The Black soup is as nutritious as it is tasty. The herbs used are quite therapeutic and it is a good option for those on a diet as it can help reduce calories. Black soup is easy to make and best prepared at home.

It is popularly served with Pounded Yam, Eba or starch. If you are visiting Edo state and you want to have a taste of this local delicacy, you will find it in the menu of most restaurants in Edo State. 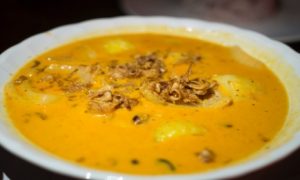 The Bini Owo Soup is named after a large town about seventy miles north of Benin. Owo soup is one of the oldest dishes prepared and eaten by both the Edo and Delta people.

While the meal is believed to have originated from Benin, there are variations of it listed as indigenous meals of people from surrounding southern states. Unlike most Nigerian soups which are cooked with vegetables like spinach, greens, and pumpkin leaves, Owo soup is usually thick and bare. It also requires Potash (okawu or kan) which is a rare ingredient for soups in Nigeria.

Most people who have enjoyed this meal tend to refer to it as stew rather than a soup, especially as it is mostly served with unripe plantain or yam, rather than Eba or Pounded yam.

The soup which is best prepared with Smoked Fish, Prawns and Bush meat, is best served in well-polished earthenware pots.

Omi Ukpoka, generally known as Corn soup, is a meal common with the Afemai people, mainly from Agenebode in northern Edo State.

Made with ground dry corn, smoked fish and a range of herbs (uda, uziza, African nutmeg), it has a very unique aroma that is inviting to the taste buds. The soup is best cooked and eaten at once as the corn tends to thicken further when cool.

Due to its high carbohydrate content, it is not recommended for people on a diet. Corn soup is mostly served with pounded yam but can also be served with Eba, Fufu and Semo-vita.

Groundnut soup is a very popular meal in Edo State and possibly the tastiest of the Edo meals. This soup is also shared by some tribes from Ghana. It is a seamless blend of sweet and savory, as the soup is made with groundnuts (peanuts), tomatoes and onions as the base, and can be considerably varied with chicken, beef or fish.

The soup is most common amongst Etsakor people in Edo State and the spiciness of the soup varies per personal taste.

If you have tasted other Nigerian meals and found them a little overwhelming, you might want to try again with groundnut soup as it most certainly should be the starting point for visitors who want to explore the various local dishes. The nutty taste makes it easier to enjoy the meal.

The groundnut soup is usually served with Pounded Yam or starch. 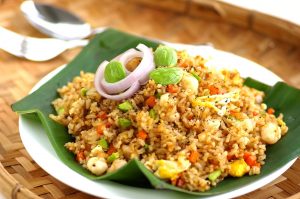 While Pepper rice is not necessarily an indigenous Edo meal, it is very popular and considered one of the most consumed meal in the state.

The meal which is most popular in the state capital – Benin city, is simply a meal of local rice wrapped in green leaves, and extra spicy/peppery tomato-based stew cooked with beef and cow intestines. Some also include chicken and goat meat in the pepper rice stew.

The green leaves give the rice a unique aroma, setting it apart from the regular boiled rice served across the country. Almost every restaurant in Benin City includes this meal in their menu.