Africa has a rich culture of scarification. Many cite HIV, and ugliness as being the reason why they would not do scarification and why the practice has been abandoned.

In the past, a woman or man would have scarification marks that will distinguish her/him from anyone else, tell her/his rank in society, family, clan, and tribe, and symbolise her beauty or strength. In some African tribes, it was like wearing your identity card on your face.

In most African cultures, it was a major aesthetic and cultural component as can be seen on sculptures in museums around the world. Scarification patterns on sculptures are not only marks of beauty, but marks of one’s lineage as well, and in some cases protection against evil spirits.

Lastly, in Africa like in Polynesia, scarification is more visible on darker skinned people than say, tattoos.

What is scarification? Scarification is the practice of incising the skin with a sharp instrument such as a knife, glass, stone, or coconut shell, in such a way as to control the shape of the scar tissue on various parts of the body. 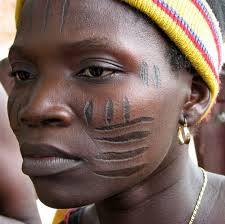 Cicatrisation is a special form of scarification where a gash is made in the skin with a sharp instrument, and irritation of the skin caused by applying caustic plant juices forms permanent blisters. Dark pigments such as ground charcoal are sometimes rubbed into the wound for emphasis. These cuts, when healed, form raised scars, known as keloids. The most complicated cicatrisation was probably found in the Congo Basin and neighbouring regions, and among the Akan people of West Africa

Scarification is a long and painful process, and a permanent modification of the body, transmitting complex messages about identity and social status. Permanent body markings emphasise social, political, and religious roles. Beautiful and complex designs depend on the artist’s skills but also on a person’s tolerance to pain.

Facial scarification in West Africa was used for identification of ethnic groups, families, individuals but also to express beauty; scars were thought to beautify the body. 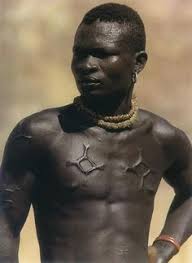 For the Karo people of Ethiopia, men scar their chests to represent killing enemies from other tribes; women with scarred torsos and chests are considered particularly sensual and attractive.

It was also performed on girls to mark stages of life: puberty, marriage, etc.

These marks assisted in making women more attractive to men, as the scars were regarded as appealing to touch as well as to look at, but also as testimony that women could withstand the pain of childbirth. Princesses in many places, including West Cameroon, used to sport amazingly beautiful and intricate marks. The sculpted face of Queen Idia of Benin Kingdom sports two marks on her forehead.

Today, the art of scarification is changing in Africa, and can mostly be spotted on elders. Mostly because of fears of HIV transmission via blades, and also because of the shame encountered. It is a culture which was once loved and is now despised. Ironically, people in western societies go under the knife to perfect their bodies; they prefer to hide their scars (it is also not on their faces)! Moreover, with the advent of identification cards, the need for scarification has also reduced. 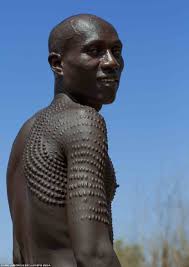 Don’t you think that it is time to cherish and not frown upon an ancient culture which had its purpose, and was an integral part of our society, history, and traditions? How are they different from modern day tattoos?